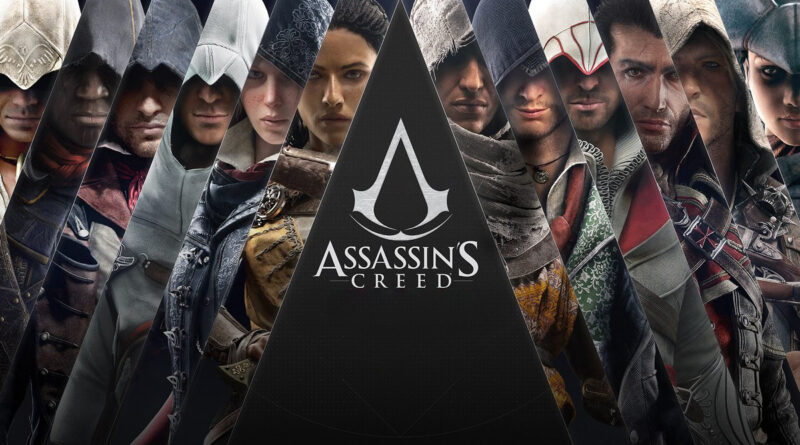 What’s more, most of the stories are set in the past as well as in the present, making it sometimes difficult to follow even for the initiated. In this Assassin’s Creed Timeline you will therefore find all the comics, books, films & series, but of course we start with the games. The games are published in this order:

This entry was last updated in November 2020.

Timelines at Beyond Video Gaming are divided in different eras. Eras with a ‘main game’ are bold so you can easily pick them out. Click or tap on a title to see all the media within the era. The following icons will mark whether something is a game, book, comic or movie.

The conflict between the Assassins and the Templars has its origins in Ancient Greece, when the Cult of Cosmos stirred up unrest during the Peloponnesian War. The Cult of Cosmos can be considered a forerunner of the Templars. In Assassin’s Creed Odyssey, the Spartan Kassandra (the player can also choose to play with Alexios, but Kassandra is considered a canon) fights this sect.

In Ancient Egypt, a forerunner of the Templars appeared. In Assassin’s Creed Origins, the Order of the Ancients uses the political instability in Egypt to open vaults of Those Who Came Before. They cross the path of the local medjay Bayek and his wife Aya, who lose their son at the hands of the Order. Their undertaking to take revenge eventually leads to the creation of the Hidden Ones, a forerunner of the Assassins.

In the third century of our current era, the Roman Aquilus (an ancestor of Desmond Miles) gives the predecessors of the Templars a good reason to look over their shoulders from time to time. The Assassin Accipiter, an ancestor of Desmond’s colleague Jonathan Hawk, lived in those days as well. You can read their story in the first three comics of the French Eric Corbeyran and Djilalli Defaux.

Assassin’s Creed Valhalla is set in this era. In this game the Viking Eivor goes into battle with the English.

The young adult book Assassin’s Creed: Last Descendants – Fate of the Gods also takes place during the age of the Vikings. In this book a group of teenagers relive the memories of their ancestors, at the time of the battle between Styrbjörn the Strong and the Danish king Harald Bluetooth. They are looking for a piece of the Trident of Eden.

In the first game, legendary Assassin Altair Ibn-La’Ahad, ancestor of Desmond Miles, discovers a crucial Piece of Eden and the Templar conspiracy. Altair also lays the foundation of the Assassin Brotherhood as we know it during the rest of the series. The book The Secret Crusade is based on this first game.

In the young adult book Assassin’s Creed: Last Descendants – Tomb of the Khan, a group of teenagers relive the memories of their ancestors at the time of the Mongolian conquest of China. On both sides of the conflict they search for a piece of the Trident of Eden.

In 1257, a Piece of Eden appeared in Egypt: the Scepter of Isis. The new sultan would use the artifact to seize power, attracting the attention of both the Templars and the Assassins. Assassin Numa Al’Khamsin, like Accipiter an ancestor of Jonathan Hawk, plays an important role in this battle.

During the Hundred Years’ War between France and England, Joan of Arc became a French folk heroine. She does so with the help of the Sword of Eden, with which she leads the French troops to victory.

In the book Assassin’s Creed: Heresy, Abstergo leader Simon Hathaway relives the memories of his ancestor Gabriel Laxart and fights side by side with Joan of Arc.

At the time of the Italian Renaissance, casanova Ezio Auditore da Firenze was dragged into the conflict between the Assassins and Templars against his will when his father, an Assassin, was murdered.

In the comic Assassin’s Creed: Homecoming, the assassin Charlotte De La Cruz relives the memories of her ancestor Giovanni Borgia, who at one point also meets Ezio Auditore da Firenze.

Ubisoft also released some spin-offs that take place during this period, but have little in common with the main games.

During the Granada War in 1492, Aguilar de Nerha joined the Assassins Brotherhood. As a brand new Assassin he has to protect Prince Ahmed de Granada and prevent the Templars from harming him.

During the Ming Dynasty the Templars seize power in China and threaten to destroy the local Brotherhood permanently.

The last Assassin, Shao Jun, already traveled to Europe in Assassin’s Creed: Embers to train with the legendary Ezio Auditore da Firenze. Shao Jun has the lead role in the game Assassin’s Creed Chronicles: China and the manga based on it. The book The Ming Storm, published only in China, tells more about Shao Jun.

In the comic Assassin’s Creed: Setting Sun the assassin Charlotte De La Cruz relives the memories of her ancestor Quila at the time of the Spanish conquest of the Inca empire.

In the comic Assassin’s Creed: Trial by Fire the assassin Charlotte De La Cruz relives the memories of her ancestor Tom Stoddard at the time of the Salem Witch Trials.

In the Golden Age of Piracy, Edward Kenway, an ancestor of Desmond Miles, played a major role in the conflict between the Assassins and the Templars. Side by side with Edward “Blackbeard” Thatch, Kenway becomes the largest pirate in the Caribbean.

Ubisoft also released some mobile games that take place during this period, but have little in common with the main games.

A few years after the Golden Age of Piracy, Haytham Kenway, Edward Kenway’s son, joined the Templars. Grandson Connor (or Ratonhnaké:ton), in turn, plays a major role in the American Revolution as Assassin.

In that period Shay Cormac passes from the Assassins to the Templars. Aveline de Grandpré fights against slavery, crossing the path of Connor.

In almost every revolution the Assassins and Templars play a role and that is no different with the French Revolution at the end of the 18th century.

In the game Assassin’s Creed: Unity we see Assassin Arno Dorian interfering in this revolution. The book of the same name tells roughly the same events, but from the eyes of the female Templar Elise.

In the comic Assassin’s Creed: The Chair, which was given away for free in 2016 during Free Comic Book Day, a book appears in Haiti that is in the interest of both the Templars and the Assassins.

The Assassin Elsie tries to get hold of this book and the contemporary Assassin Charlotte de la Cruz relives her memories.

In the comic Assassin’s Creed: Templars – Cross of War, Assassins and Templars compete in Tripoli for the Koh-i-Noor. Cross of War is a continuation of Black Cross, although the historical timeline of Black Cross only takes place in 1927.

The battle between the Assassins and Templars reached India in the 19th century. The Maharajah Ranjit Singh, possessor of the Koh-i-Noor, ruled here. This magnificent jewel has special properties and therefore changes hands several times.

The Assassin Arbaaz Mir, whose story we discover thanks to Abstergo employee Jot Soora, plays a major role in the struggle for this object.

In the young adult book Assassin’s Creed: Last Descendants, a group of teenagers relive the memories of their ancestors at the time of the New York Draft Riots in 1863. They are looking for a piece of the Trident of Eden.

At the end of the Industrial Revolution, the Templars threaten to take over power in London – and with it the entire British Empire.

Indian Henry Green, born as Jayadeep Mir and son of Arbaaz Mir, enlists the help of twins Jacob and Evie Frye in Assassin’s Creed Syndicate to fight the Templars together in the English capital.

The book Assassin’s Creed: Underworld partly serves as a prequel. It follows Henry Green on an assignment prior to the events of Syndicate, and then tells the events of the game from Green’s perspective.

On the eve of the Russian Revolution, Assassin Nikolai Orelov hunts down a Piece of Eden owned by Tsar Alexander III.

Through his fight against the Tsar, Orelov, ancestor of Daniel Cross, helps the Bolsheviks and therefore plays a major role in the Russian Revolution. Orelov comes into contact with significant persons like Lenin and Nikola Tesla.

In the comic Assassin’s Creed: Templars – Black Cross, a templar is active in China under the name Black Cross. At the same time, the Shanghai massacre breaks out.

During the Second World War, the Nazis experimented with Pieces of Eden, creating a precursor to the Animus.

During the Vietnam War, the Assassin Alekseï Gavrani operated on the front line. As part of the Bloodstone Unit, a group of Assassins in the U.S. Army, he was confronted with corruption within the Creed.

In Vietnam he fights together with Julia Gorm, daughter of Eddie Gorm, who was active as Assassin during the Second World War.

In modern times the Templars celebrate their heyday and the Assassins have to limit themselves to a real guerrilla war. It is the period that we know in the games mainly thanks to Desmond Miles.

The descendant of Altair, Ezio and Connor, among others, is undoubtedly the most important character of modern times, but certainly not the only one.

Soon more about the modern timeline of Assassin’s Creed. In this period the comic series Uprising takes place.

In Assassin’s Creed projects that are still under development, it is not always known when they will take place. For example, there is a TV series, possibly an animated series of Assassin’s Creed in development. This series may appear on Netflix. Contents of the series are not yet known.

Over the years, a handful of spin-off media have also appeared that usually draw on multiple points in time and hardly belong to the official canon. For the sake of completeness we mention them anyway.

This Assassin’s Creed Timeline has been composed with as much care as possible. Nevertheless, it is possible that an error has crept into our chronological order. Are you an even bigger Assassin’s Creed fan than we are? Please contact us and tell us what we did wrong!

Now we place the games in the Assassin’s Creed Timeline, along with all the comics, books, movies and series. Most

Gears of War Timeline – Everything in Chronological Order

4 August 202027 September 2020 Lars Cornelis 0
Yes, we use cookies. Otherwise, this website would not work. If you continue to use this site we will assume that you are happy with it.OkPrivacy policy