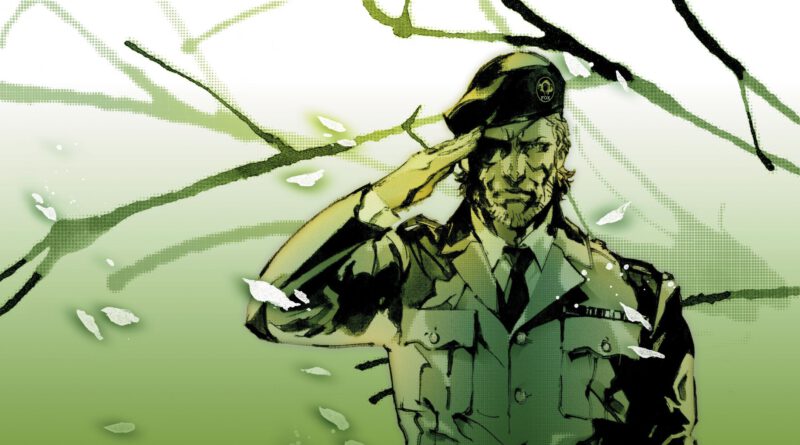 The chronological order of Metal Gear Solid has become quite complicated. The series consists mainly of games, but there are also several books and comics published. There is even a movie in the making. To put everything in perspective, we’ve created the Metal Gear Solid Timeline.

This entry was updated in March 2021.

The Metal Gear Solid saga is known for its complicated story full of intrigues and plot twists. Its creator Hideo Kojima does not make it any easier by jumping back and forth through time. Family members of characters regularly return, looking the same and even being voiced by the same voice actor. Nevertheless, the main characters Big Boss, Solid Snake, and Raiden clearly run like a thread through the series, which gives us something to hold on to when trying to arrange the games in order.

Please note that this article contains spoilers for all installments in the series. This Metal Gear Solid Timeline is intended as a reference to put the titles into perspective. However, we do not go into much detail, so the games should still have more than enough surprises to offer if you have not yet played a specific game.

This is the chronological order of Metal Gear Solid. Click on a title to read more about that particular videogame.

Timelines at Beyond Video Gaming are divided in different eras. Click or tap on a title to see all the media within the era. The following icons will mark whether something is a game, book, comic or movie.

If possible, we provide you with a link that enables you to play, read, watch, or buy it right away. We may earn a commission for purchases using our links.

Metal Gear Solid 3 introduces us to a young Big Boss, then known by the code name Naked Snake. As Naked Snake, he infiltrates the Soviet Union in 1964 to stop a new weapon: the Shagohod, a precursor to the titular Metal Gear. During this mission, Naked Snake acquires the title of ‘Big Boss’.

The story of Metal Gear Solid was adapted into the following media:

Metal Gear Solid: Portable Ops was not written by Hideo Kojima but is still considered canon. In this game, Big Boss severs his ties with the U.S. government and takes the first steps to establish an independent military group called Foxhound in 1970. It is also – chronologically – the first videogame in which Snake battles a Metal Gear.

In Metal Gear Solid: Peace Walker, Big Boss has now completely split from the U.S. government. In 1974, Big Boss and his mercenary group Militaires Sans Frontières are hired to liberate Costa Rica from occupancy and take out Peace Walker – basically a new type of Metal Gear. Eventually, this allows Big Boss to expand his MSF and rename it to Outer Heaven.

Metal Gear Solid V: Ground Zeroes acts as a prologue to Metal Gear Solid V: The Phantom Pain. In the short story taking place in 1975, Big Boss is hired to infiltrate a U.S. Army base in Cuba. Several characters from Peace Walker return in this game, including Kazuhira Miller and Paz Ortega Andrade. Ground Zeroes ends with the destruction of Mother Base, connecting directly to The Phantom Pain.

Released as Metal Gear Survive in 2018 for PlayStation 4, Xbox One and PC.

Metal Gear Survive was made after Hideo Kojima had already left publisher Konami. Therefore, Survive is not considered canon by many fans, but the game is directly related to the main series. Unlike the main games, Survive is not a stealth game: it’s a survival game with zombies.

In the aftermath of the destruction of Mother Base in 1975, part of the base is sucked into a parallel world through a wormhole. The player, an unnamed soldier, is later sent to this world as well. Here the player must survive amidst zombies and other strange creatures, and find a solution to the zombie infection. To accomplish his mission, the nameless soldier uses, among other things, a Metal Gear that also ended up in the parallel world.

In Metal Gear Solid V: The Phantom Pain, you play as Venom Snake. Although the game would have you believe that this is Big Boss, it is actually a new character who, through hypnotherapy and plastic surgery, thinks he is Big Boss. After the events of Ground Zeroes in 1984, Venom Snake establishes a new military group, Diamond Dogs, to take revenge on the group that destroyed Mother Base and eliminate Metal Gear Sahelanthropus. Meanwhile, the real Big Boss is building Outer Heaven.

Metal Gear is the very first game in the series and is taking place in 1995. In this game, Solid Snake is brought in to infiltrate the hostile nation of Outer Heaven and take out Metal Gear. Eventually, he also takes out the leader of Outer Heaven, Big Boss. It was not until The Phantom Pain came out that it became clear that this was not the real Big Boss, but actually Venom Snake.

Metal Gear 2: Solid Snake, not to be confused with the spin-off Snake’s Revenge, is set in 1999, several years after the original Metal Gear. Solid Snake must once again infiltrate a hostile nation, this time Zanzibar Land. He destroys another Metal Gear, called Metal Gear D, and once again takes out Big Boss – the real one, this time.

Its remake Metal Gear Solid: The Twin Snakes was released in 2004 exclusively for the Nintendo Gamecube.

The story of Metal Gear Solid was also adapted into the following media:

Metal Gear Solid 2 consists of two parts. The first part, set in 2007, follows Solid Snake tracking down Metal Gear RAY. Snake appears to go down together with RAY and the cargo ship on which the weapon is transported.

In 2009, Raiden is called into action to infiltrate the off-shore decontamination facility called ‘Big Shell’ in the New York Harbor. A group known as the Sons of Liberty terrorist group, led by Solidus Snake, has taken the president hostage and also appears to have captured the secret warship Arsenal Gear. With Solid Snake’s help, Raiden manages to defeat Solidus Snake and stop Arsenal Gear, although the ship does crash in New York and cause a lot of damage there.

The story of Metal Gear Solid 2: Sons of Liberty was also adapted into the following media:

In 2014, Liquid Ocelot, a fusion of Liquid Snake and Revolver Ocelot’s personalities, engulfs the world in constant conflict through various Private Military Companies. Solid Snake, now old and gray and therefore called Old Snake, is sent out to eliminate Liquid Ocelot. Snake also manages to destroy The Patriots, a secret group that tries to control the world from behind the scenes. Snake is aided in this task by Raiden, among others.

The story of Metal Gear Solid 4: Guns of the Patriots was also adapted into the following media:

Metal Gear Rising: Revengeance was developed under Hideo Kojima’s supervision but is not 100% canon. Kojima himself considers the game a “parallel continuation,” but we can safely consider Rising canon for now in the absence of other continuations.

Metal Gear Rising: Revengeance is set in 2018, four years after the dismantling of The Patriots. Raiden is working for a Private Military Company. He stumbles upon a plot by a U.S. Senator to seize power in America through a provoked war, just as The Patriots did. The senator also possesses a new weapon, Metal Gear EXCELSUS. Raiden manages to take out both the senator and the new Metal Gear.

The Metal Gear Solid Timeline already includes a few games that are not quite considered canon (especially by fans). Still, several Metal Gear Solid games are definitely not part of the official canon. A brief overview:

Originally released in 1987 for the NES, later also released on PC and Commodore 64

The original Metal Gear was modified quite a bit for the NES. So much, in fact, that this iteration is not considered canon. For example, the titular Metal Gear was dropped from the game. Instead, Solid Snake infiltrates Outer Heaven to destroy a ‘Supercomputer’.

Snake’s Revenge is a sequel to the NES version of Metal Gear in which Snake infiltrates a military base where a new Metal Gear is supposedly being made. Big Boss turns out to be responsible for the Metal Gear. Snake defeats Big Boss and destroys Metal Gear 2.

Released in 2000 for the Game Boy Color.

Metal Gear Solid, better known as Metal Gear: Ghost Babel (that’s how the game was released in Japan), is an alternate sequel to Metal Gear in which Solid Snake must infiltrate the fictional African country of Gindra to destroy the stolen Metal Gear GANDER.

Released in 2004 for the PlayStation Portable. Later also ported to some cell phones.

Released in 2005 for the PlayStation Portable.

Metal Gear Acid 2, like its predecessor, is a turn-based strategy game. A clone of that game’s Solid Snake is tasked with infiltrating a research facility. While there, he encounters Metal Gear Chaioth Ha Qadesh, which he obviously destroys.

Released in 2008 for various cell phones, including the Nokia N-Gage

Released in 2012 for iPhone and Android phones.

This Metal Gear Solid Timeline has been composed with as much care as possible. Nevertheless, an error may have crept into our chronological order. Are you an even bigger Metal Gear fan than we are? Please contact us and tell us what we did wrong!

2 thoughts on “Metal Gear Solid Timeline – Everything in Chronological Order”

With games, downloadable content, books, comics, and even an animated film, the chronological order of Mass Effect is a complicated

Gears of War Timeline – Everything in Chronological Order

31 March 202131 March 2021 Lars Cornelis 2
Yes, we use cookies. Otherwise, this website would not work. If you continue to use this site we will assume that you are happy with it.OkPrivacy policy